Friday December 30, 2016 11:00am – As I’m leaving Ride on Moto with a new skid plate for my KTM 1290 Super Adventure, John Ross suggests I bring Noah down to the 2017 Hangover Hare Scramble the following Sunday.

Tuesday January 3, 2017 5:30pm – Back at Ride on Moto picking up a new helmet I mention the hare scramble to the parts manager, Lance. He suggests I enter Noah in the race. John provides me with the website information so I say I’ll look it up when I get home.

Wednesday January 4, 2017 8:04am – I email the race director with a few questions to include whether I can register Noah for both the Micro and Youth races.

8:16am – They email me back a reply answering my questions. They also confirm he can ride in both races.

Thursday January 5, 2017 1:09pm – I decide to order him a proper pair of dirt bike boots. They’re supposed to arrive on Saturday.

7:47pm – I pre-register Noah for both the Micro and Youth races.

Friday January 6, 2017 10:30am – Due to impending inclement weather the Hare Scramble has been postponed until Sunday January 15th.

3:00pm – I break the news to Noah that the race has been postponed until next Sunday.

4:40pm – We stop by Ride on Moto on the way home to pick up a new helmet visor for me. While we’re there Luke and Jake Ross help Noah pick out a new pair of Scott goggles and fit him for a new dirt bike helmet.

Saturday January 7, 2017 4:00pm – There is a box on the front porch when we get home. Noah opens it to find a new pair of O’Neil riding boots. He’s super stoked. Kristen is also excited because she’s pretty sure she’ll be able to wear this NEXT pair of boots once he outgrows them.

Sunday January 15, 2017 4:05am – I awaken to my alarm going off after a solid 5 hours of sleep. Fortunately, most of Noah’s gear was packed the night before (thanks Kristen). I had to get myself dressed and then get the bikes loaded up in the truck.

5:00am – I make it halfway out the driveway before realizing I should probably take his work boots with me. I back the truck down the driveway and grab his boots.

6:01am – Picked up Noah from his mother’s house. He’s excited and ready to go.

7:42am – We arrive at Wicomico MotorSports Park. After paying the entry fee and getting a couple of wrist bands we head back to the pit area to find a place to park.

8:10am – Noah and I walk over to the registration tent to check in and pick up the timing transponder. On the walk over I start to notice just how sloppy the track is due to the rain leading up to today.

8:30am – While Noah is getting changed into his riding gear, I’m trying to get his CRF50 started. The little bike just doesn’t want to start. After a few kicks, I let it sit and go back to helping him get suited up.

8:40am – Noah is ready but the bike still doesn’t want to start. At this point, I’m starting to get concerned that he’s not going to make it to the starting line in time for his race.

8:45am – FINALLY! The bike decided to start and we have enough time to get it warmed up before he has to head over to the starting area. 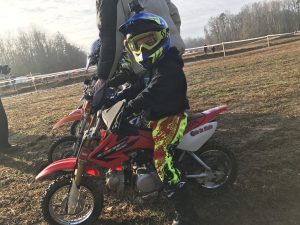 9:00am – Noah is on the starting grid with the other Micro 50cc racers. He’s never raced before and really has no idea what to expect but he’s got a big smile on his face and I can tell he’s excited. When the green flag drops, Noah drops back to dead last. Travis Latham (that kid can ride) gets the hole shot (spoiler alert: he never relinquishes the lead) with another rider not far behind him. As Noah approaches the first turn two riders go down right in front of him. He’s able to navigate around them and start heading down the first straight away….less than 30 seconds into the race, he too has crashed. He gets the bike back up and is able to pass another downed rider before he crashes again. He gets the bike up once again and takes off. After that it all became a blur for awhile. The little 50cc riders were crashing all over the place. Their little 10 inch tires were no match for the mud and ruts.

I think Noah entered the wooded part of the course in dead last. I stayed out on track waiting for him to exit. After Travis Latham exited the woods, still in first place, the next few minutes seemed like they took forever. Coming out of the woods next I see Noah. I immediately look at ahead to the rest of the track thinking I must’ve missed the other riders. Nope. Noah is in second place. I’m not sure what happened in those woods but he came out a totally different rider. His pace was much faster and he wasn’t struggling near as much.

9:40am – Making his way back to the pits I informed him he finished in second place. He really had no idea he’d finished on the podium.

10:20am – I wish I could say the Trail Bike 7-11 class went as well as the Micro race but in his second race Noah DNF’d. I could tell he was visibly tired after his first race. What I didn’t realize was how wet he was. All of his gear was dripping wet and he was soaked to the bone. With temperatures in the low 40s, wet clothes and having just finished a race, Noah made the decision to retire from the second race.

10:40am – After getting Noah changed into some dry (and clean) clothes, we stop by the Ride on Moto pit area to hang out with Jake and Luke while John is doing some last minute tuning to their bikes. I leave Noah there to hang out by the heater while I run his transponder back up to the scorers.

11:20am – Noah and I head back over to the truck to get everything loaded up.

11:40am – We headed back over to the starting area because the adult race is set to begin at noon. 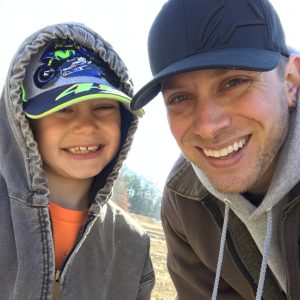 12:30pm – After we finished watching the start of the adult races, which as a TON of fun, we walked back over to the tent where Noah received his second place award. He was ready to go get some lunch and I had promised him we’d go to Bert’s 50’s Diner, a place we’d eaten over the summer while visiting Kristen’s parents. In addition to his award he also received an envelope. Inside the envelope was a gift certificate for a free dessert from Bert’s…how fitting.

Closing Thoughts – The people the put on the 2017 Hangover Hare Scramble, the riders, the spectators and everyone else involved couldn’t have been better. Noah thoroughly enjoyed his first racing experience and I enjoyed meeting a lot of great people and catching up with some friends as well.

Oh…and in a few days I’ll be posting a video about the event. 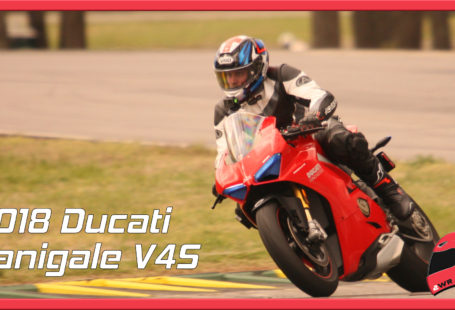 2018 Ducati Panigale V4S on the track at VIR 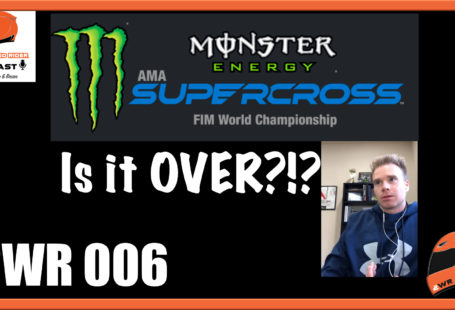