I know I stated in my last post that I try not to make a habit out of traveling on holiday weekends but…it happened again. This time Kristen and I left Thad at home (seriously, who would rather attend TWO weddings than go riding??) and took off on a 5 day trip.

After getting some breakfast at the Clearbrook Shopping Center, we rode up to Moorefield, WV and got on Rt 220 South taking it all the way to Covington, VA. From that point we headed west to Lewisburg, WV before taking Rt 219 South, which turns into Rt 460. Both Rt 220 and Rt 219 are great motorcycle roads. There’s not a whole lot of traffic and there are plenty of curves to keep you from getting bored. After a crappy lunch at a Wendy’s in Tazewell, VA we continued on Rt 19  to Bristol, VA/TN. We rode down the main street to see the Virginia/Tennessee split which is something worth seeing if you’re ever in that area. We also rode passed Bristol Motor Speedway which looks like a big football stadium. From Bristol we had about 120 miles left until we reached our destination for the night. 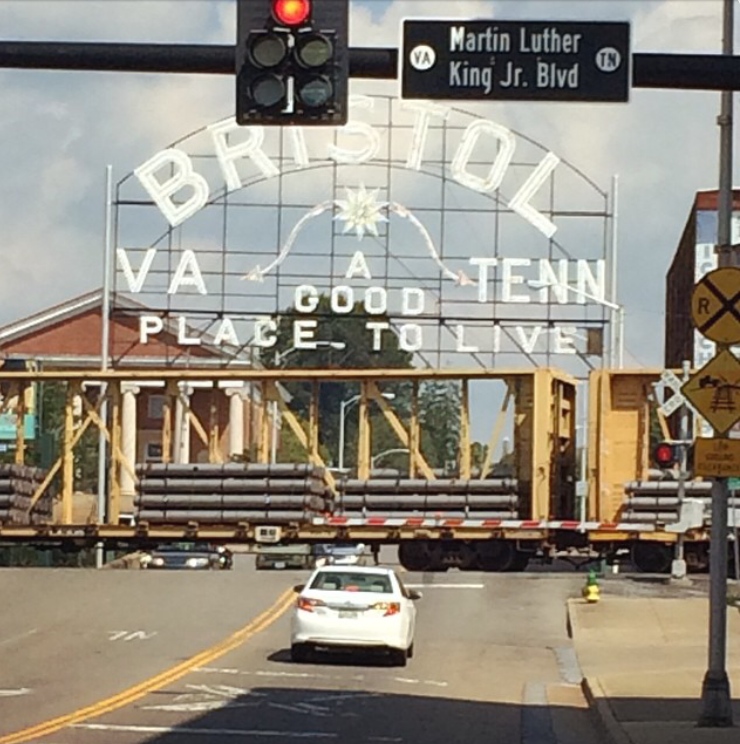 We rolled into Maggie Valley, NC around 5:00pm and got a room at the Five Star Inn. The hotel staff was super-friendly and the hotel itself was nice enough…tho I’m pretty sure the “Five Star” part is self-proclaimed. We walked next door to the Moonshine Grill for dinner. I wasn’t expecting much but they served me one of the best steaks I’ve ever had! Turns out on Trip Advisor they have a 4.5 star rating which I’d say is fair. The rest of the evening I sat out on the front porch of my hotel room, drinking a couple of cold ones, and shooting the breeze with our 2 Harley-Davidson riding neighbors.

Side note: I’d been to Maggie Valley 10 years ago and visited the Wheels Through Time Museum. While I didn’t have time to visit it on this trip, it’s definitely worth checking out. 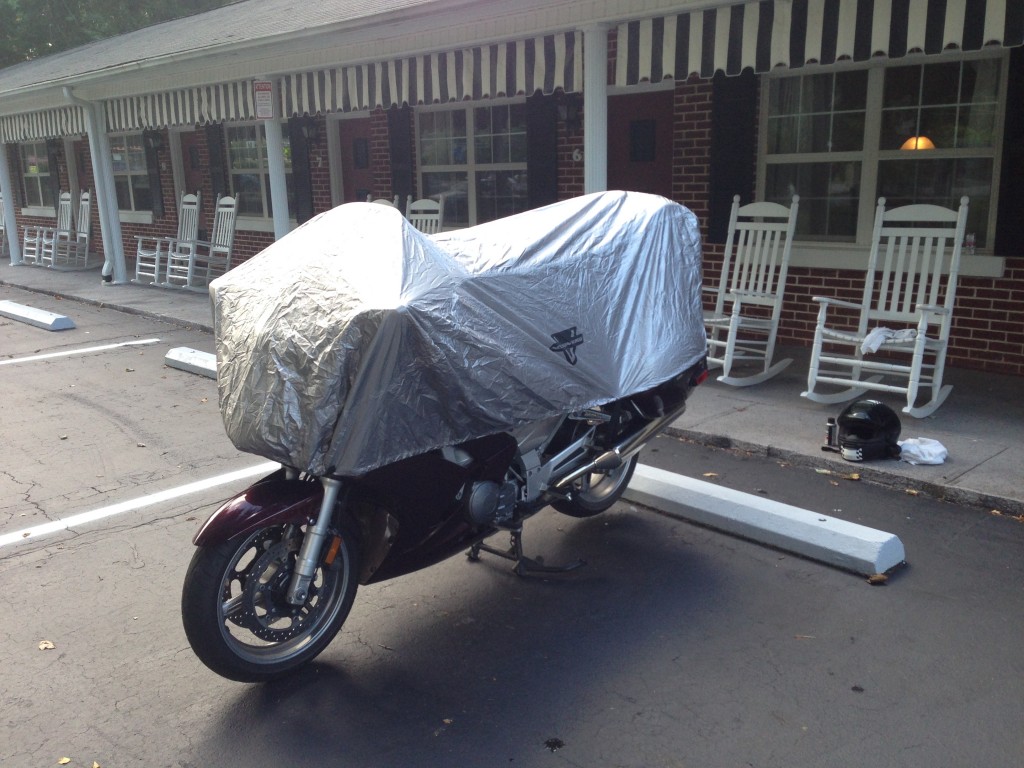 It had rained overnight but the bike was dry thanks to my half-cover. Before leaving town we stopped at Joey’s Pancake House for breakfast. I had the Reese’s Cup pancakes and Kristen had the Bacon pancakes…WOW….SO GOOD! I give Joey’s my highest recommendation when it comes to breakfast. With a full belly and a full tank we once again headed west going through the Great Smoky Mountains into Cherokee, NC on our way to Deal’s Gap.

If you’ve been riding motorcycles for more than a few months, you’ve probably heard of Deal’s Gap or the “Tail of the Dragon.” US Hwy 129 has 318 curves in 11 miles. My last trip to Deal’s Gap was 10 years ago. Back then I was riding a 2003 Honda CBR 600 F4i. While the 11 mile stretch may have been more fun on the CBR, the 500+ miles getting there this time was definitely more enjoyable on my FJR. 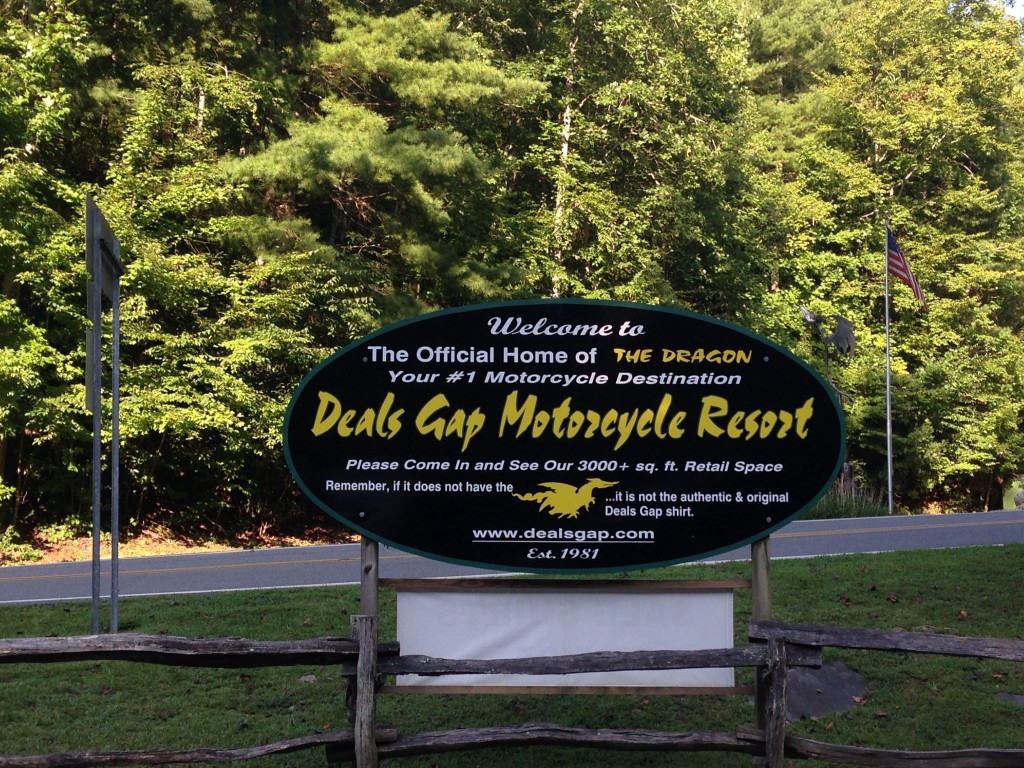 The Deal’s Gap Motorcycle Resort looked different (better) than the last time I saw  it. We took a stroll through the gift shop and picked up some cool souvenirs. After we walked out of the gift shop we were reminded to respect the Dragon…or end up on the tree of shame. 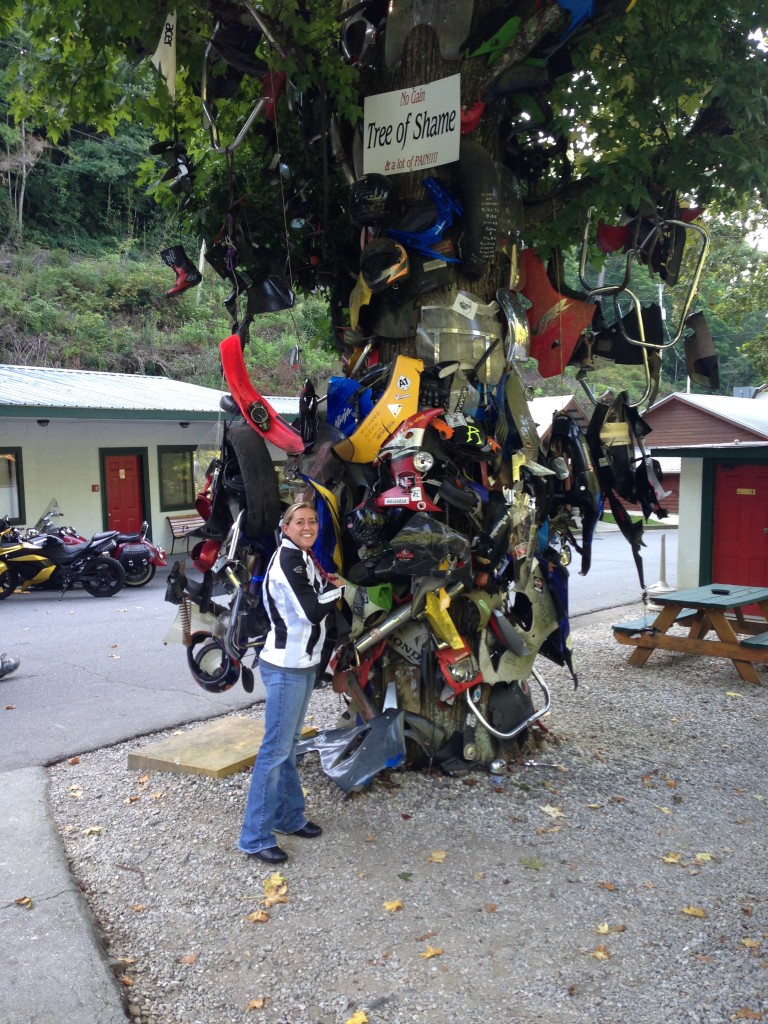 During our next 11 miles I was reminded of how fun it would be to have a sport bike and my race leathers on as we saw plenty of guys dragging knees but… when you’re riding a 700 pound motorcycle with the trunk and both saddlebags loaded, plus a passenger on the back and you’re only on day 2 of a 5 day ride… I kept my senses about me and didn’t push too hard. We still ended up with a cool picture from KillBoy to document the ride. 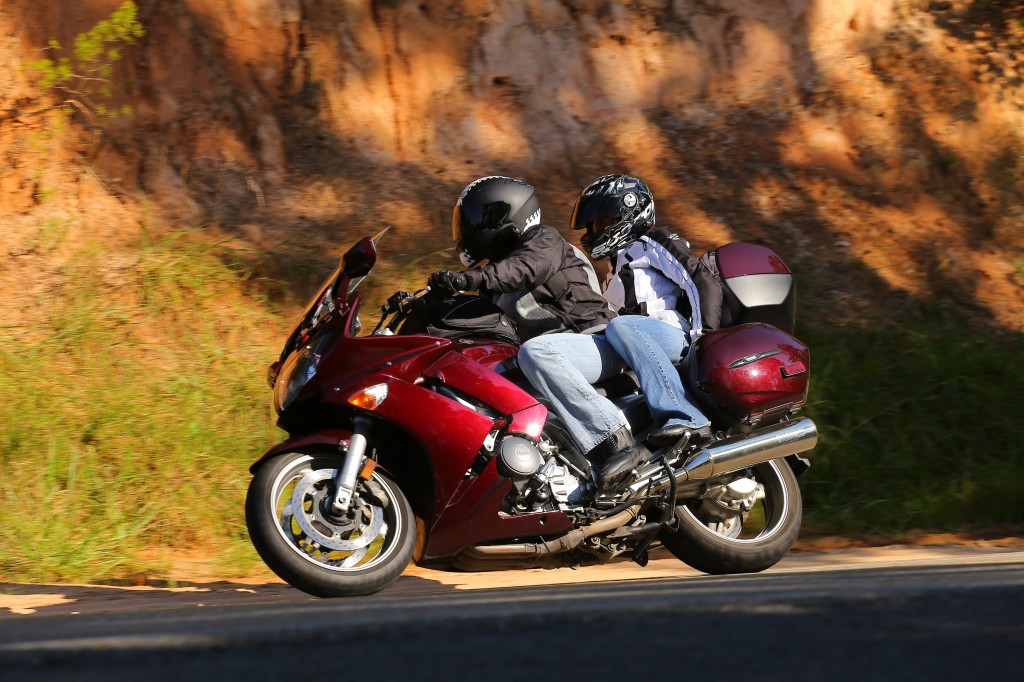 After our ride on the Dragon we continued on to Lynchburg, TN arriving at the Jack Daniel’s Distillery at about 1:00pm. After looking around the welcome center for about 30 minutes, our tour began a little after 1:30. The tour, much like the Jim Beam tour, was very interesting and a fun experience. Most of the time, we weren’t allowed to take pictures in the buildings but I’ve posted a few pictures below of areas we were allowed to photograph.

Side note: If you didn’t already know, Lynchburg is located in Moore County which is a dry county. 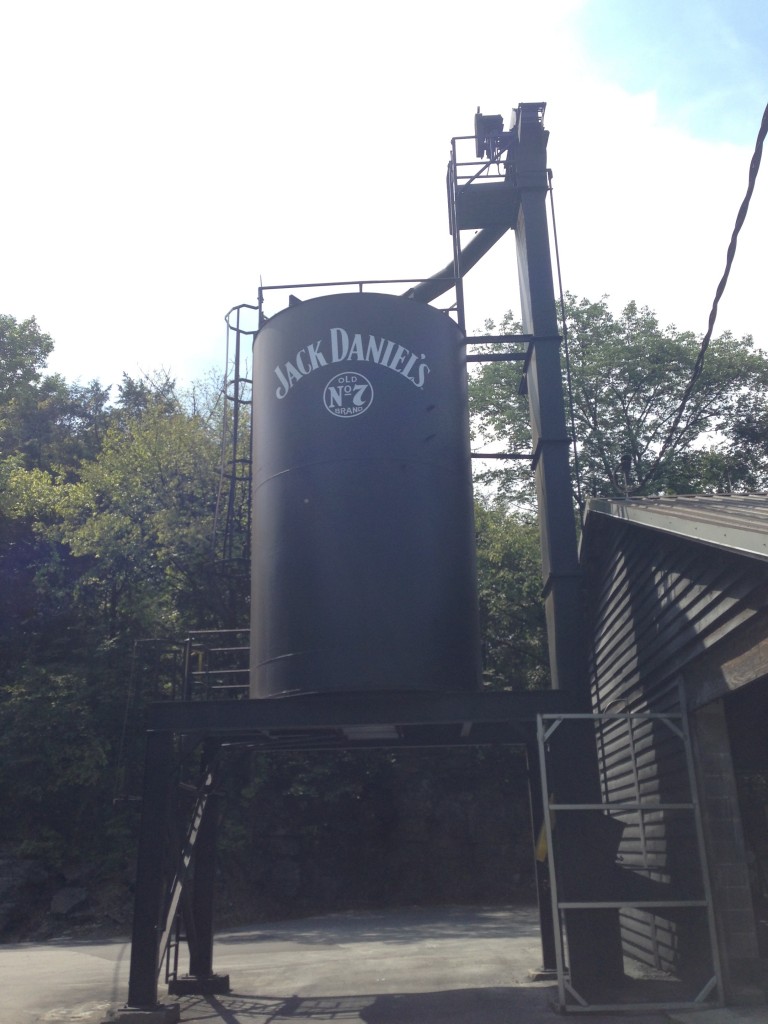 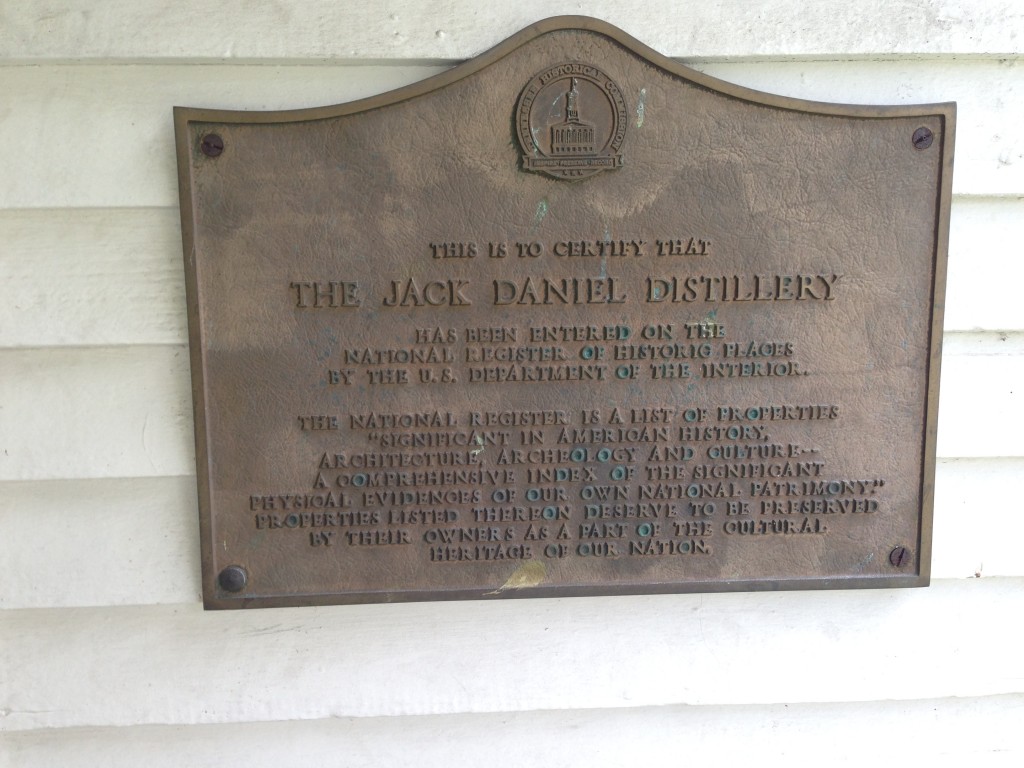 When our tour concluded we rode (less than a mile) over to the Lynchburg Hardware and General Store, aka the Jack Daniel’s Gift Shop. This place was HUGE! We spent quite awhile in the store, picking up  a few souvenirs and then walked around the courthouse square for a bit checking out a few other shops. Once we finished up, we fueled up the bike before leaving town and then headed about 130 miles south to Fultondale, Alabama for the night.

I hadn’t been through Alabama since driving through on my way to spring break back in college.  So I obviously had to pull over at the welcome center to snap the photo below. 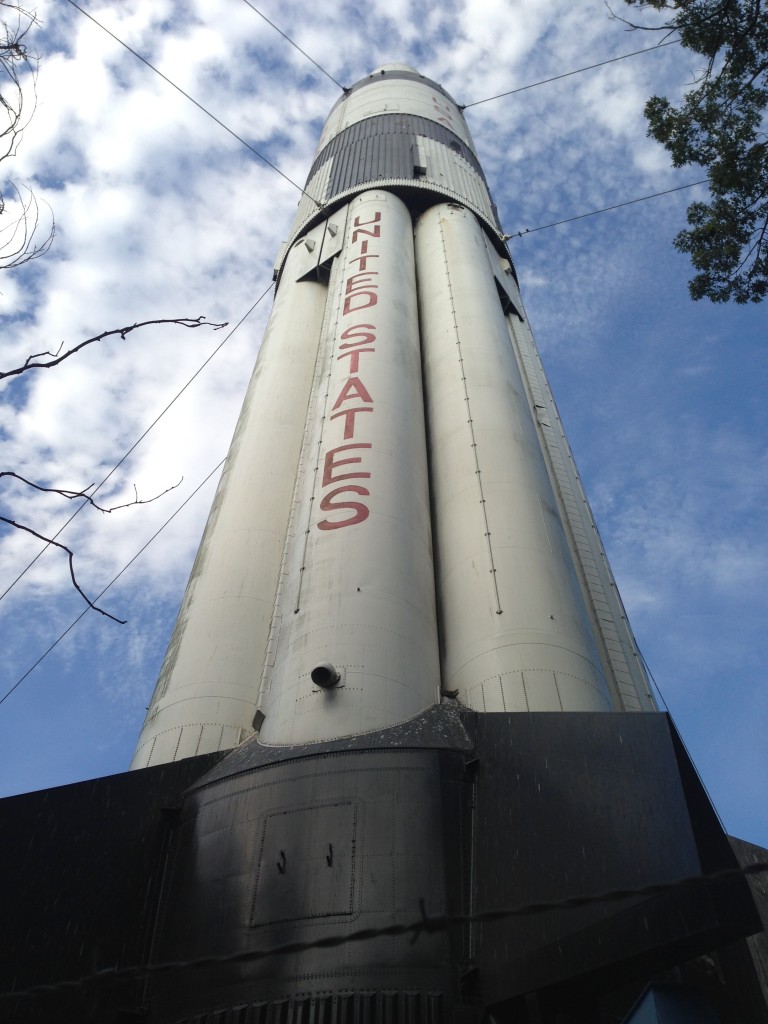 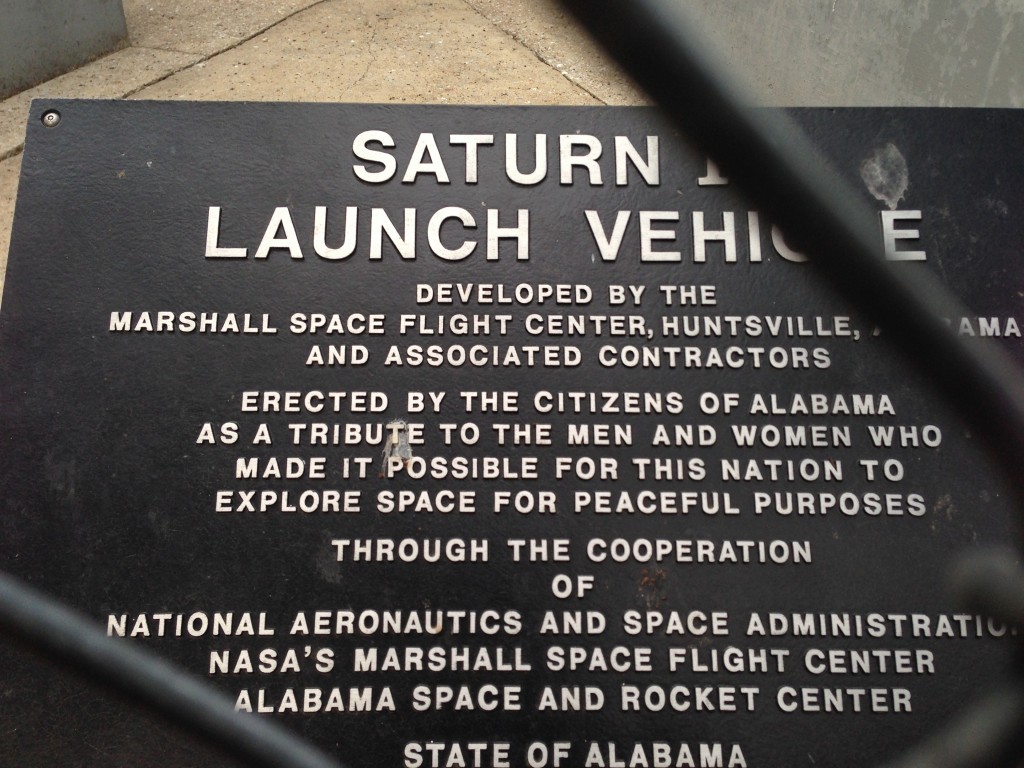 Originally, I was going to go a bit closer into Birmingham but I spotted a Hampton Inn off exit 267 on I65 and we were spent from another 400+ mile day of riding so we called it a day. Twenty minutes after the bike was parked we were in the pool cooling off from a hot and sticky day.

The third day was probably my favorite and least favorite day of all.

It was my favorite day because we got to start out at Barber Vintage Motorsports Museum. This place was AMAZING! The museum had 5 floors of motorcycles as well as some F1 cars and other racing vehicles but mostly motorcycles. The staff there was very friendly so after paying the $15 entry fee we spent the next 90 minutes checking out all of the bikes. The pictures don’t do this place justice! The entire place is just overwhelming.

When we finished up at the museum we headed north toward Nashville. It was my least favorite day because even though it was (probably) our lowest mileage day of the trip, it was all interstate and SO HUMID. The temperature was only about 93 degrees but the humidity was almost unbearable. We ended up getting off the interstate around Spring Hill, TN to search so Kristen could pick up a Starbucks, Tennessee mug (I think I’ll write an entire blog posting about her and her mugs at a later date) and then took state routes the before finally getting back on the interstate before arriving in Nashville.

It must’ve rained before we got into town because the roads were wet. After making a quick pass down Broadway, we settled on a hotel about 1/2 mile away from the bar area. I’m glad we got into town when we did because 30 minutes after I covered the bike…it DOWN POURED!

Kristen found a cool restaurant on Yelp called the Whiskey Kitchen while I used the Lyft app to get us a ride over there.  We sat out in the (covered) deck area which was first come, first served instead of waiting over an hour on a table inside. We had some excellent food and some Jack Daniel’s (We were in Tennessee, after all). 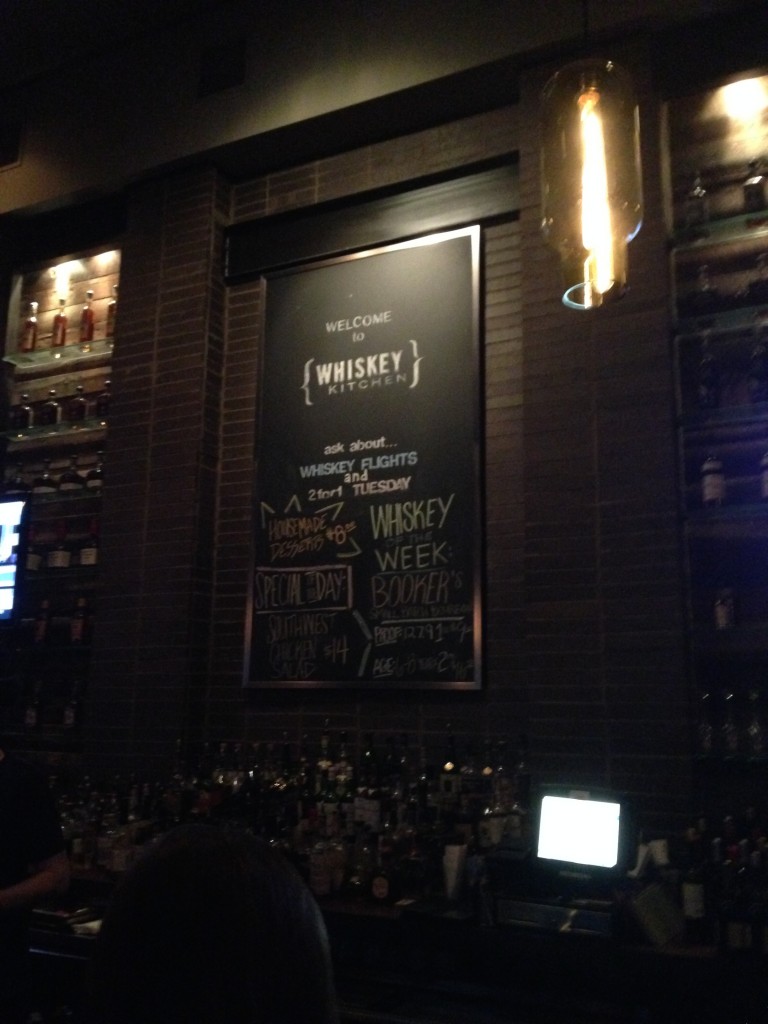 After dinner we caught another Lyft down to Honky Tonk Central; a 3 story bar with live bands on all 3 floors. They has some great country music bands, a fun atmosphere and probably the cheapest drinks of the trip. I’d definitely go back to this bar next time I’m in Nashville.

We woke up to an overcast sky (and thankfully no hangovers). After loading up the bike we stopped by Starbucks (yes, another mug) and rode to the Parthenon. 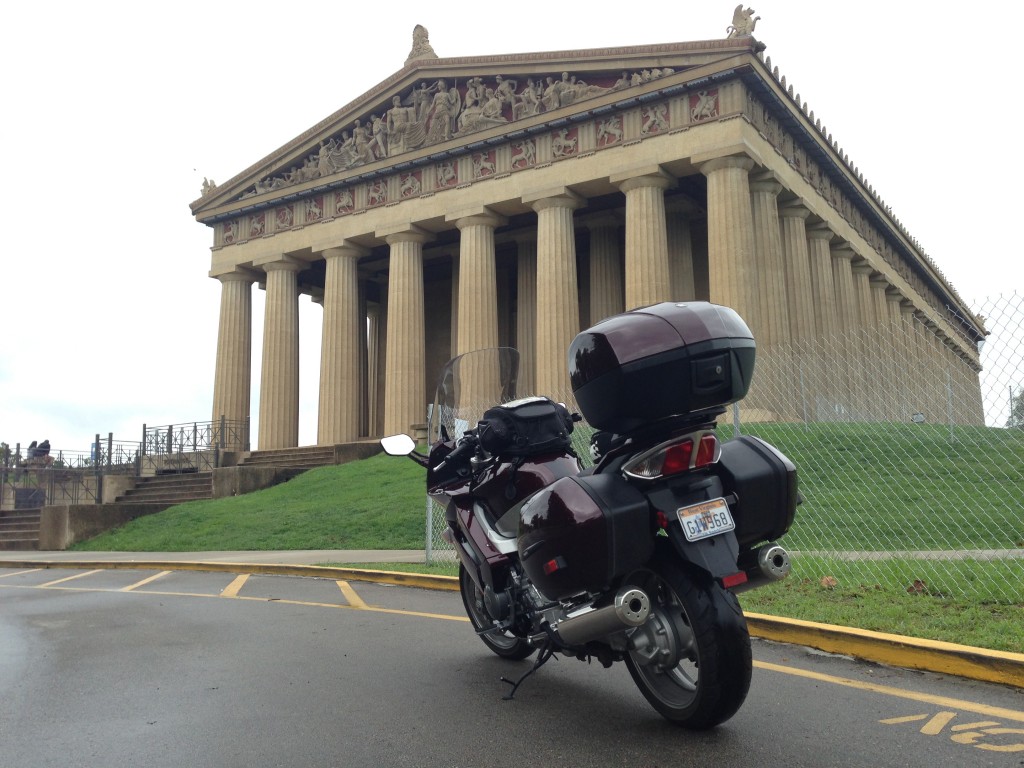 We then took I40 East on our way to Pigeon Forge. There were plenty of times during the 200+ miles that it looked like it could start raining at any moment, fortunately it didn’t. In fact, by the time we got to Pigeon Forge the sun was shining brightly. We stopped for lunch at J.T. Hannah’s and then used the Hotels.com app to book a room a mile or two up the rode at a Days Inn. 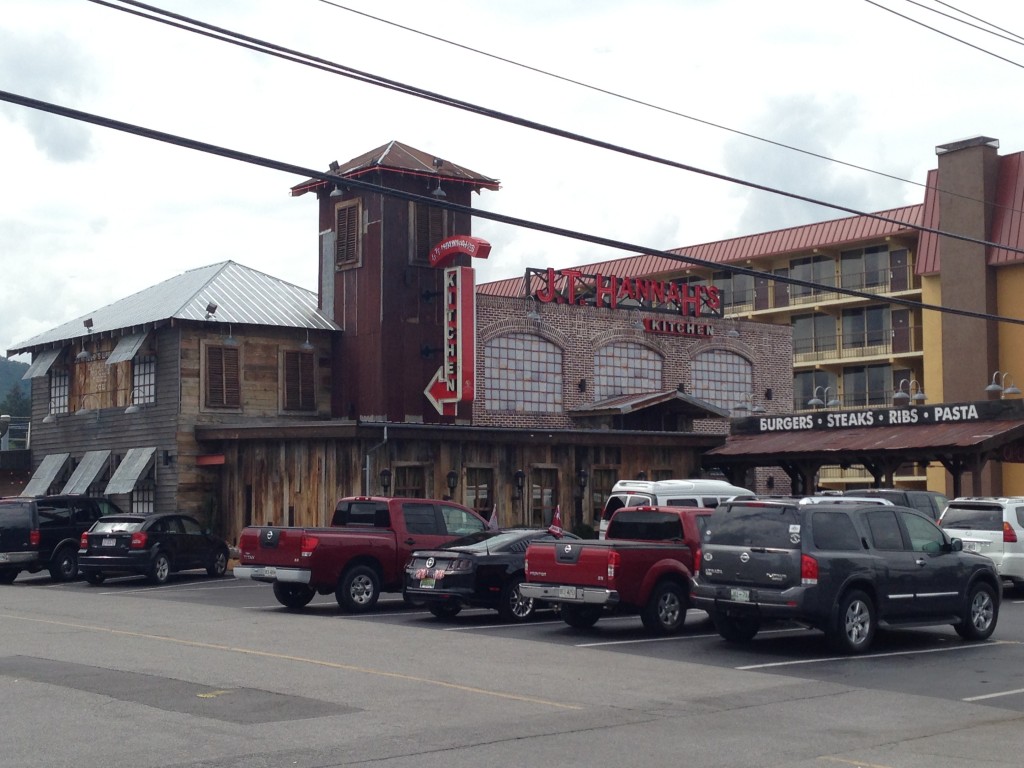 We got checked in at 3:00 and hit the pool to cool off. There were some rather “interesting” people at the pool. I’ll just leave it at that. Once we got showered and dressed we talked down the street to see Terry Evanswood’s magic show. I don’t like to say anything negative about a fellow magician so I won’t give a review of the show. After the show we got dinner at Big Daddy’s Pizza. The service there was super-friendly and the pie was excellent.

The final day was all about getting home. We knocked out the 430 miles mostly on I81 and were home by mid-afternoon. We had a great time on the 5 day trip riding  nearly 1,900 miles. With almost 8,900 miles on my Bridgestone BT-23 GTs (many of those miles riding 2-up) it looks like it’s time for a new set of tires. 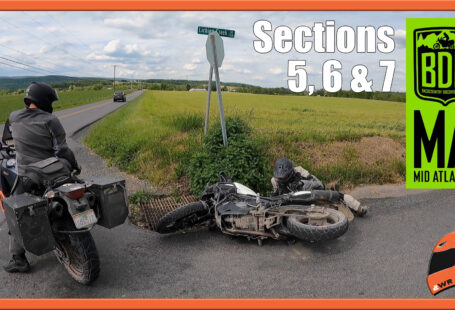 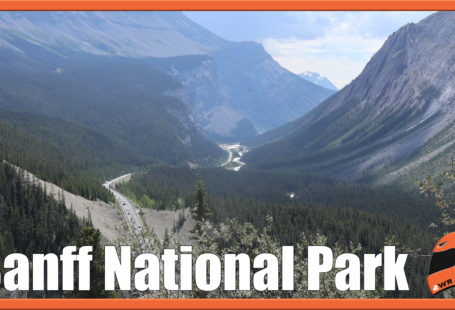 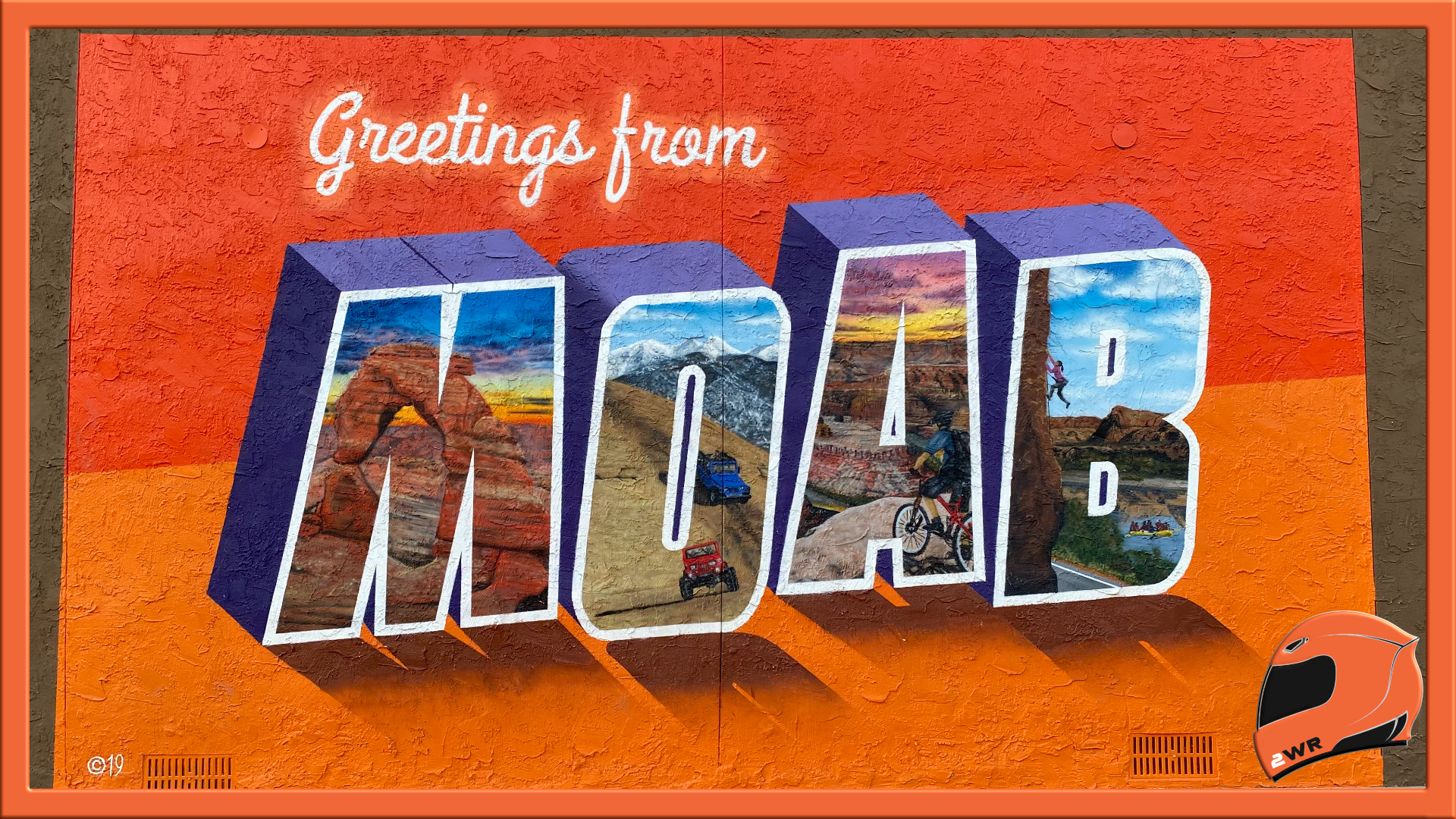